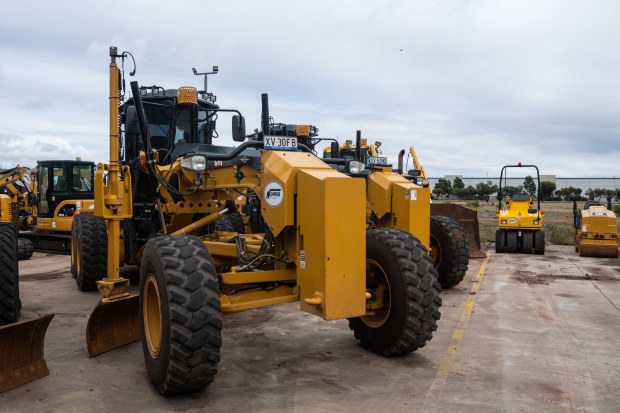 Globally constricted supply chains are one part of the problem.

Another is changes to insolvency laws and the boost given by JobKeeper payments during the pandemic. These kept many businesses going but have also interrupted the typical flow of equipment going back into the system as companies fail and their assets are recycled into the industry.

The Norris liquidation sale was the first such large auction that Pickles, which worked with restructuring firm KordaMentha to dispose of the stock, had held since the pandemic began.

“There hasn’t been much insolvency over the last two years,” Mr Hsu said.

“We’ve done several $30 million sales in the past, but … the government changed the insolvency laws. There was no mechanism for anyone to pursue liquidation or bankruptcy.”

In February, the insolvency industry also warned that a stay on enforcement activities against companies by the Australian Taxation Office had created a ticking time bomb by allowing unviable companies – particularly in construction – to stay afloat, setting up a potentially disastrous run of corporate failures after the federal election.

The Norris liquidation sale, which ran as a series of separate auctions over several days, included 1284 individual assets ranging from civil construction, transport and waste recycling equipment to drones and light commercial vehicles.

The growing number of tunnel, road and rail projects, as well as demands created by flood repair work in Queensland and northern NSW, was driving demand for items such as motor graders, skid steer loaders and on-highway tippers and “dogs” (trailers), Mr Hsu said.

As more companies started to go under, stock levels of in-demand equipment used for transport and civil work – such as preparing land for development – would increase and prices of equipment would come back down, Mr Hsu said.

Many buyers of the used equipment at these prices were borrowing to do so and this exposed them to further risk, KordaMentha partner Andrew Knight said.

“With interest rates increasing and the potential for improved supply of equipment into Australia, there is a high risk of companies becoming over-leveraged,” Mr Knight said.

“For those where the additional cost can be passed on to the customer, the risk may be lower. But those purchasing speculatively without the ability to recover cost through their customers … will ultimately find themselves in trouble.”